Whether you have a few days, a weekend or longer to explore, Naxos has an infinite list of things to do and see.

From the wild mountains that capture the artists’ and filmmakers’ creative eye, to olive groves valley lanes topped by the endless Aegean blue skies, ELaiolithos offers a quintessentially great Cycladic getaway because of its privileged location. Being in the center of mainland Naxos, every part of the island is accessible at equal time and you can explore all the attractions very easily.

We are passionate about Naxos and we aim to share the best places to visit, experiences to share with friends and family, and – because all of the best days out involve good food and drink – the interesting spots to stop, chat and savor the moment.

Every day is different in ELaiolithos and this is the place to discover what makes it one of Naxos’s un-spoilt holiday venues.

Want to enjoy a perfect Naxian break? Here we have some suggestions of the unmissable hidden treasures we love, which we think will make your stay special.

Out and about………start your holidays & create memories worth repeating……

This is really unmissable if you are in Naxos!!! ELaiolithos’ rooms and terrace are facing this fascinating Byzantine Church which is 300 meters down the road. This is a hidden treasure with a strongly mystical atmosphere – a real beauty in itself. It stands amongst olive trees and against the clear blue sky. Historically is significant because of its architectural and artistic importance. Inside this rural church of Panagia Drossiani that was built in phases between the 4th and 6th century, you can see the frescoes in the dimly lit church. The monastery is dedicated to the Panagia of rain. The oldest core of the building has fine 5th-century frescoes of the equestrian saints George and Dimitrios, the Christ Enthroned, the Virgin and a Diesis – given the vicissitudes of the island; it’s amazing anything has survived. It is considered the oldest Byzantine church in Cyclades. 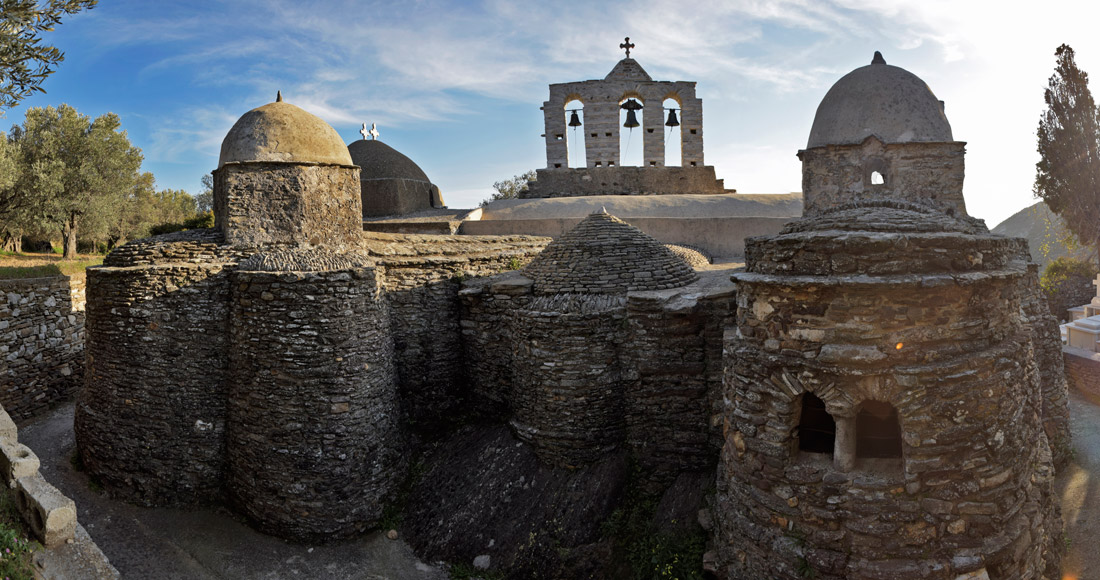 Visiting this 11th century church is a must, if you visit Naxos. The location is wonderful and its frescoes (dating back to 11th and 13th century) are magnificent. This is a stone built church with unusual architecture and stands out for its module and harmony. It is accessible through different hiking paths (2 Km from ELaiolithos) or through Chalkio village and then you walk about 400 meters. The route is surrounded by olive groves and fruit trees. The great deal of frescoes and the way they are placed make the church an extraordinary example of Byzantine heritage. The main figures depicted are those of Agios Georgios (Saint George), Saint John the Baptist and the Archangel Michael. 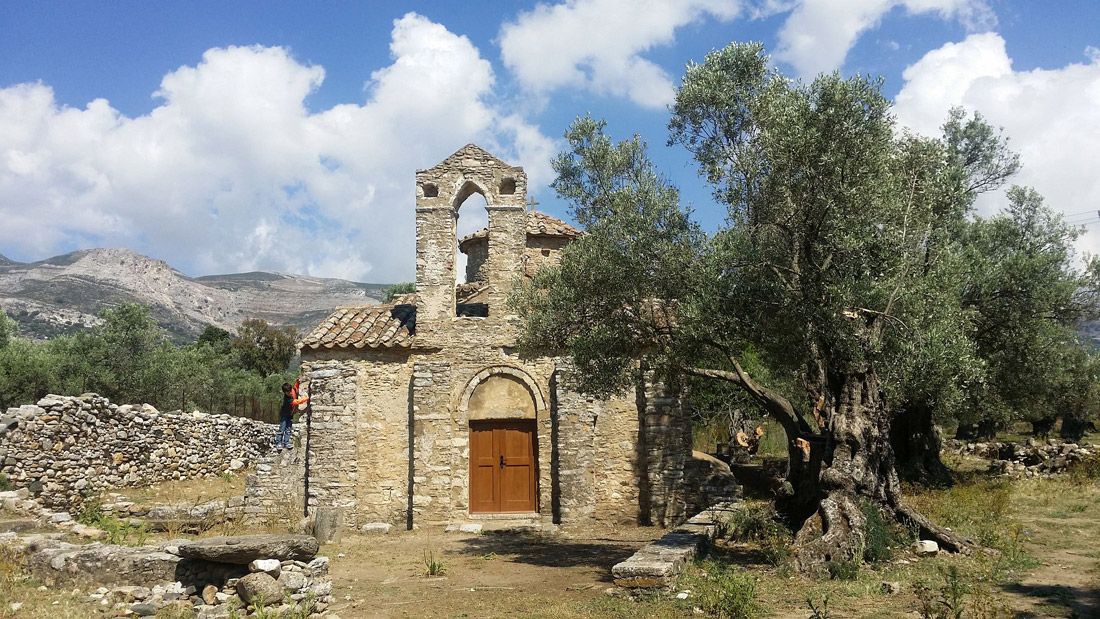 The dome is based on four pillars with side aisles forming an equal-angled cross, and its narthex has an inscription referring to Protospatharios (one of the highest court dignities of the middle Byzantine period awarded to senior generals and provincial governors) while it has coats of iconography dating from the 11th century and then. Plenty of light penetrates the church’s interior making it even more impressive.

Open July and August by volunteers. But even if it is closed when you are here, we recommend you visit it, it’s worth it.

History and nature blends together. It is a 4 Km distance by car, from ELaiolithos to Tsikalario. The sight is accessed via a footpath from Tsikalario or via the marble quarries through Kinidaros, but you will realize that it is worth your time as soon as you get there. The impressive castle stands at an altitude of 420m while it has an excellent view to the valley of Traghaia in the east and the village of Potamia in the west side. Its location proves that it was a benchmark for Central Naxos and especially for the municipality of Drymalia. Close to castle walls are the two Byzantine chapels of Virgin Mary Kastriani and Saint George. At the bottom of the hill, there are also two ancient cemeteries from the Geometric period (9th-8th century BC) and an ancient 3 meter upright stone monument which is considered unique in SE Europe. Findings from these cemeteries are today hosted at the Archaeological Museum of Naxos. 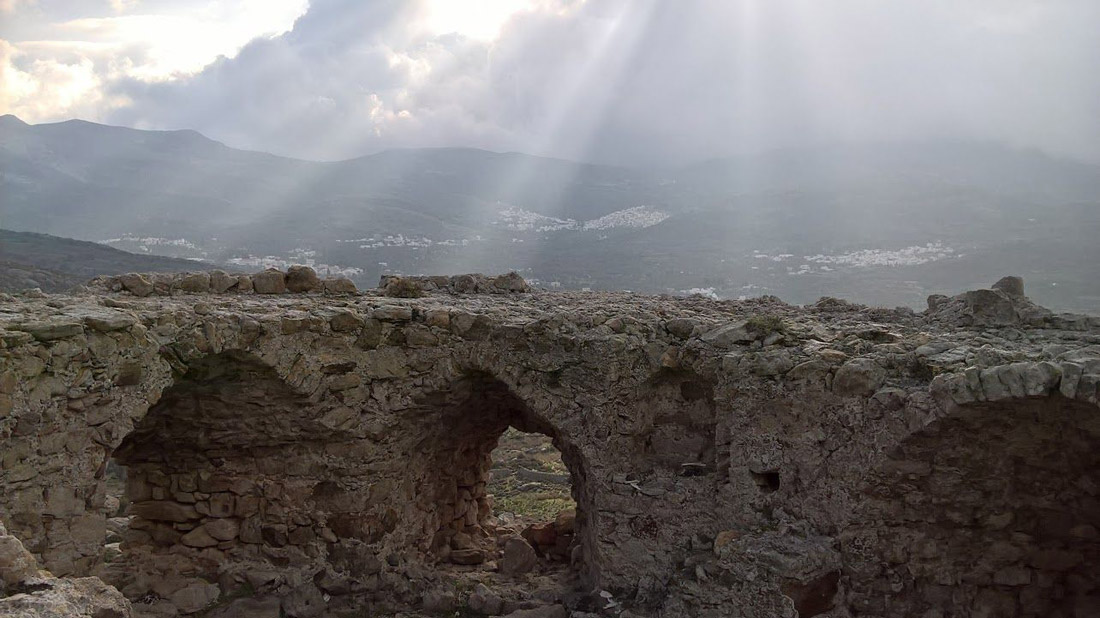 This imposing Castle was the residence of the Duke of Naxos in the Medieval Times. It was originally constructed by the Venetian Marco Sanudo, who eventually chose the Castle in Naxos Town as his residence. Today, the Upper Castle continues to be impressive just like its prosperous days and during your visit you will also have the chance to feel the power of its past.

Monastery of Fotodotis, 7km distance from ELaiolithos, along an easily drivable asphalt road through the Filoti  and then towards Danakos. It’s also accessible by walking paths. Originally a three-aisled Byzantine basilica, founded during the Komnenoi dynasty early in the 12th century, it was enlarged and fortified around 1497, judging from an inscription. There is superb marble flooring, and on the altar screen relief you glimpse traces of the original wax-based pigment. Every year on August 6th celebrates the feast of the Transfiguration, the courtyard hosts its annual festival. 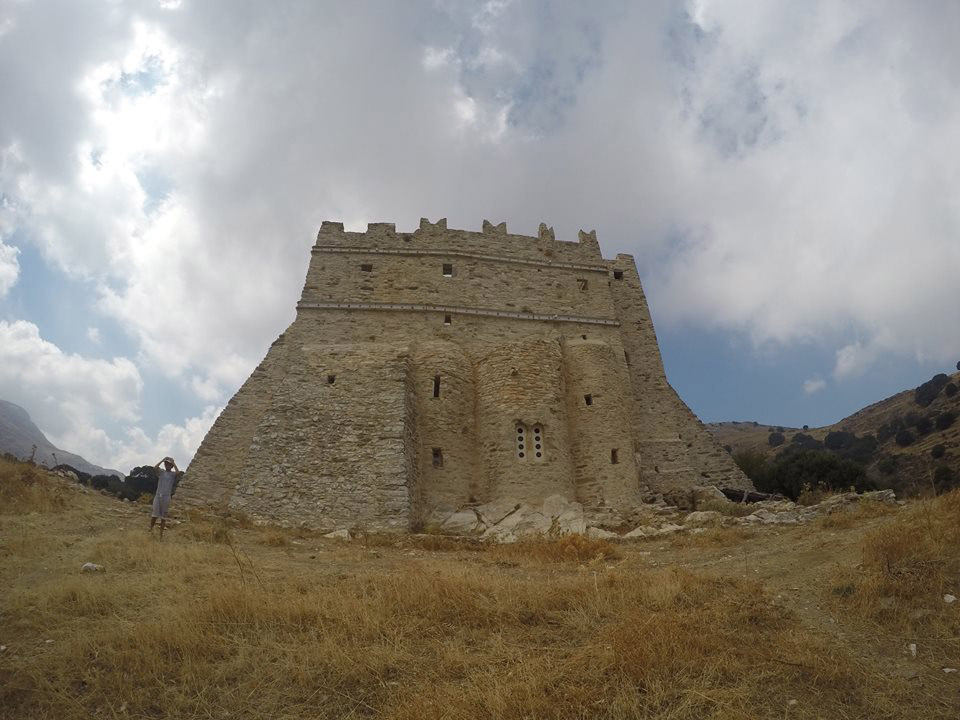 Five minutes down the road from Fotodotis, there is the charming village of Danakos; worth a look primarily because of its remoteness and the water source that exists under a huge 25 meter plane tree. It is said to be this tree is older than the village, at least 800 years old. Here the water comes out from a fissure in the rocks into a little pool and it is drinkable. In this village there is also a tavern in the square where you can taste delicious local gastronomy. 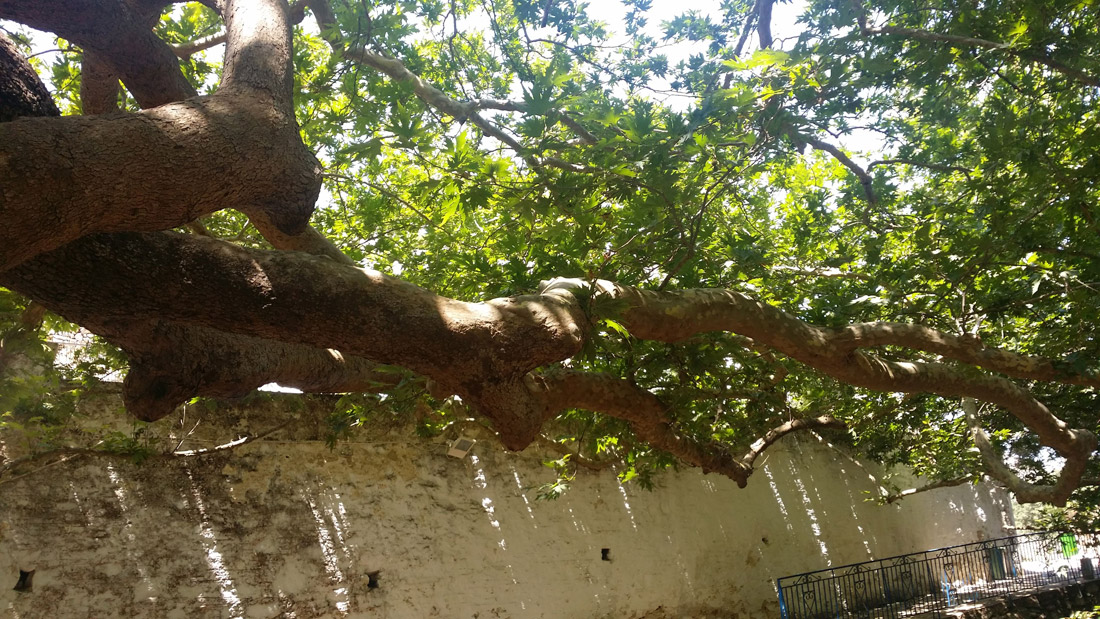 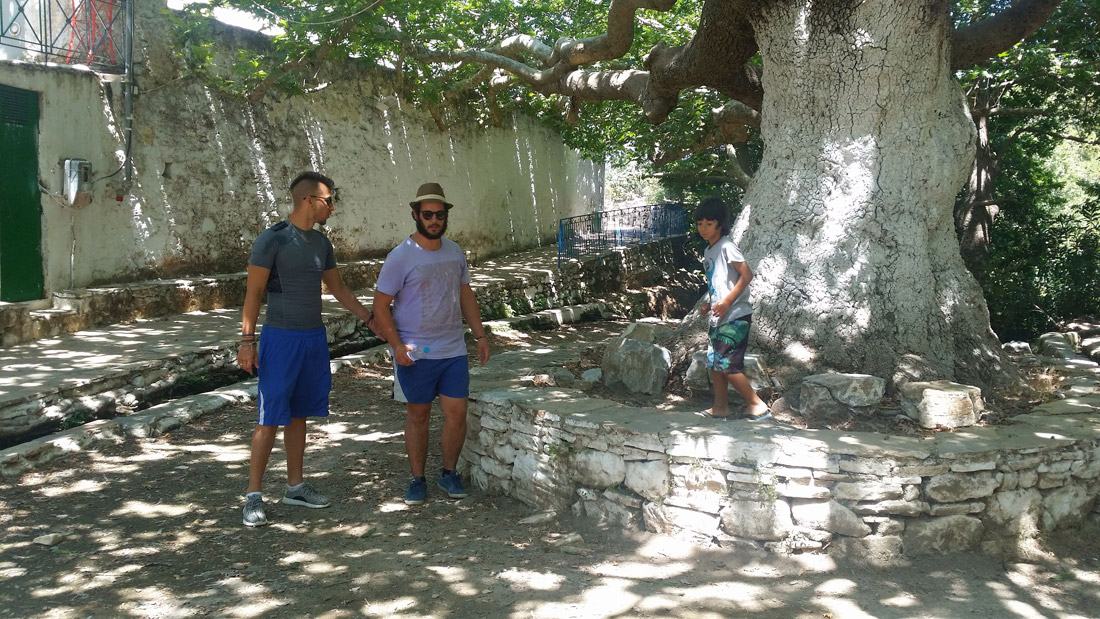 Temple of Demeter at Gyroula

Accessible by car, an interesting visit and free attraction, the Temple of Demeter, just 7 Km away from ELaiolithos, right beyond the Sangri village, stands on a picturesque hilltop overlooking a fertile valley settled since the Mycenaean Archaic Era. Here history and nature blend together. Excavations in the area certify that the area was used for religious purposes; the cult of the gods was open air. The temple was built in around 530 B.C in the classical architectural style. This stunning temple (it is rumored that Parthenon is based on its pattern) and the extraordinary museum on the site are in absolute harmony with the natural setting around.  It is definitely one of the most imposing sites in Naxos.

The grounds are always open, though a small display of on-site finds works only Tues–Sun 8.30am–3pm. 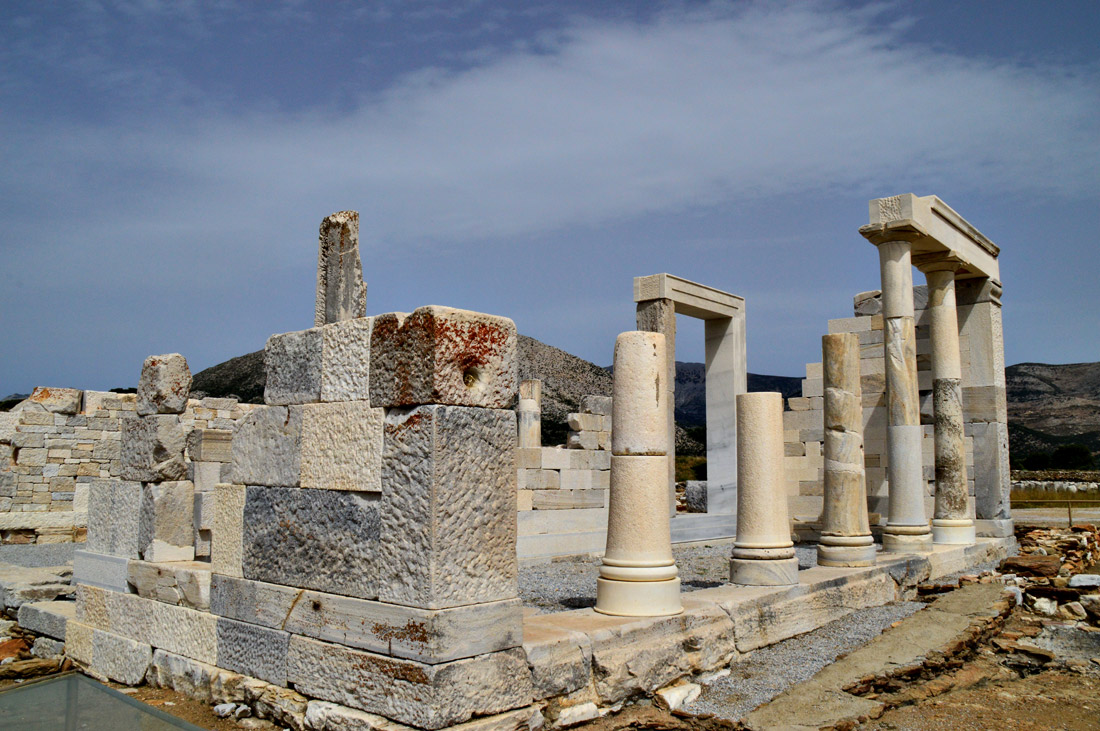 This is a unique historical monument with fascinating biblical kind views inside and outside. Rome has its Colosseum and Naxos has also its own glorious edifice- Colosseum with lots of history behind it- an impressive complex. 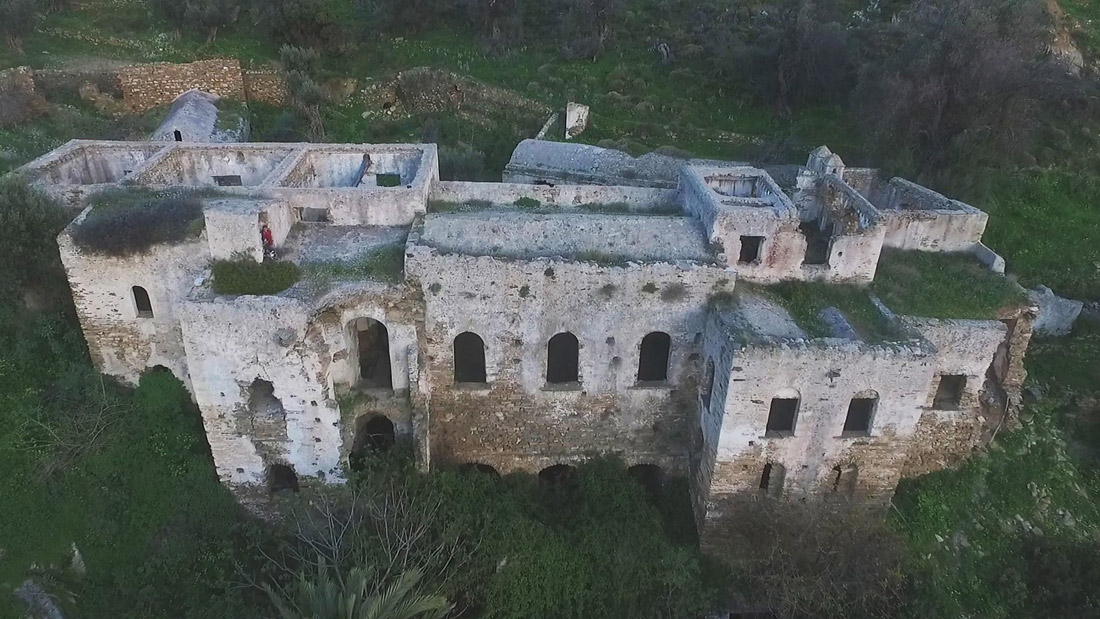 Just off the road between Ano Potamia and Melanes villages within 2 Km down huddle the ruins of Kalamitsia founded by the local Jesuit monk Roberto Sauze in around 1670 and was constructed on the ruins of an older Venetian mansion. It was used more of a retreat for the order and its guests than a strictly governed monastery. Its marvelous design, elegance & luxurious style provoked strong reactions from the residents of that time as this stunning opulent luxury was opposed to the supposedly austere life of the monks.

Being a distinct mixture of western and local architecture, it includes many rooms, chapel, auxiliary buildings such as dovecote, stable, cells and olive mill, and a huge garden featuring terraces, bearing walls, cisterns and flights of stairs. Visitors can also see a giant fireplace that indicates the kitchen and the laundry rooms.

The low-slung chapel is surprisingly modest, while the impressive arcade refectory has three lancet windows overlooking the former gardens with palm and cypress trees protruding from tangled brambles.   A broad central staircase leads down to a cellar cistern with still-flowing spring, or more daringly up to the roof terrace for great views.

The palace is in ruins and completely accessible at all hours of the day. As the building has not been restored, special attention is required during your visit.

A must visit place while on Naxos!

The Giant Kouros in Apollonas

16 Km distance from ELaiolithos on an asphalt road. A well worth drive to North of Naxos to the Appolonas area to see the 11 meter long Kouros statue (6th century BC) – an unfinished statue of god Apollo, abandoned on a hillside just above the northern beach of Apollonas from which the village took its name. This is a fascinating piece of history lying just meters from the side of the main road. You walk up a few stairs from the road and witness the size of this colossal statue; it really makes you wonder seriously on how people made this huge marble piece and how they were going to erect it. From here you will get also amazing views of the town below, the bay, and the Aegean Sea. 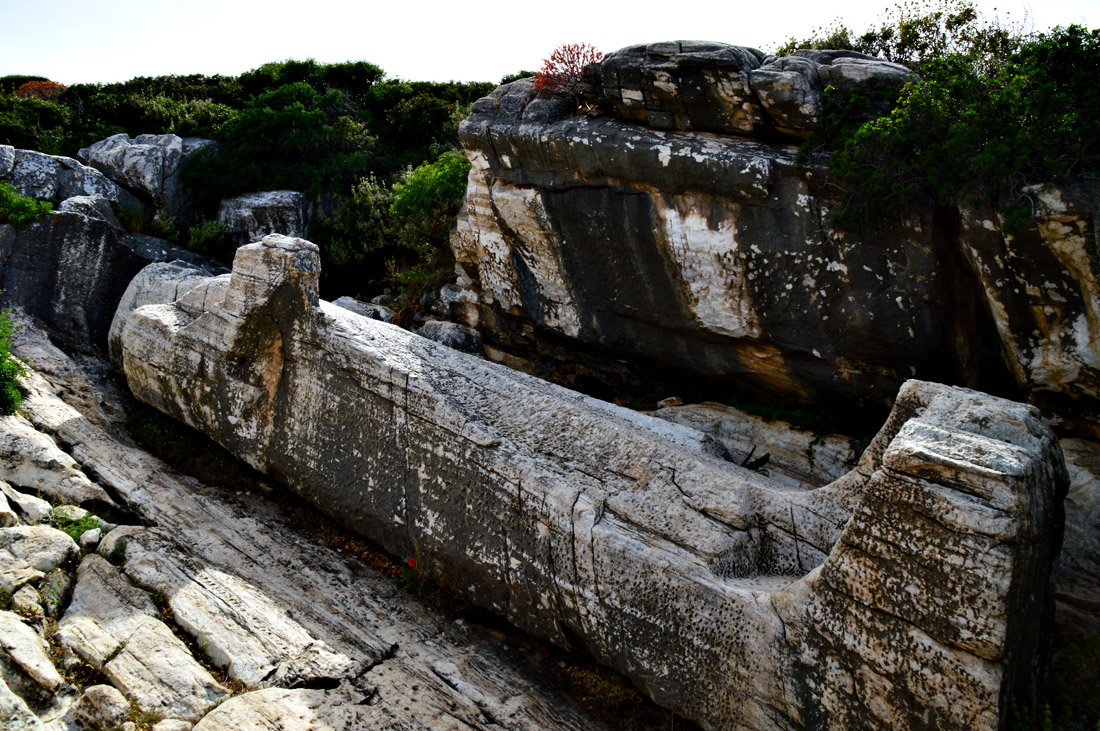 The Kouros Statues in Melanes/Flerio

Another interesting sightseeing is in Melanes/Flerio where two archaic unfinished colossal marble statues of a young man named Kouros can be seen. Near the village of Flerio, you can see the called Kouros of Flerio, and another one the Kouros of Faranghi.  Since ancient times this location was and is still operating as a marble quarry on the slope of the hill nearby.

Impossible to miss is amongst the most famous landmarks of Greece is the Portara on Naxos, a massive 2,500-year-old marble doorway that leads nowhere, situated on the small islet of Palatia immediately north of town, now connected to the mainland with a causeway-a narrow and low strip of land. The glorious gate was constructed of four large pieces of local marble, each of them 16 feet long & weighting around 20 tons each. It has a height of almost 8 meters (26 feet) and a width of more than 3.5 meters. It dates from the time of local ruler Lygdamis (c. 525 BC). 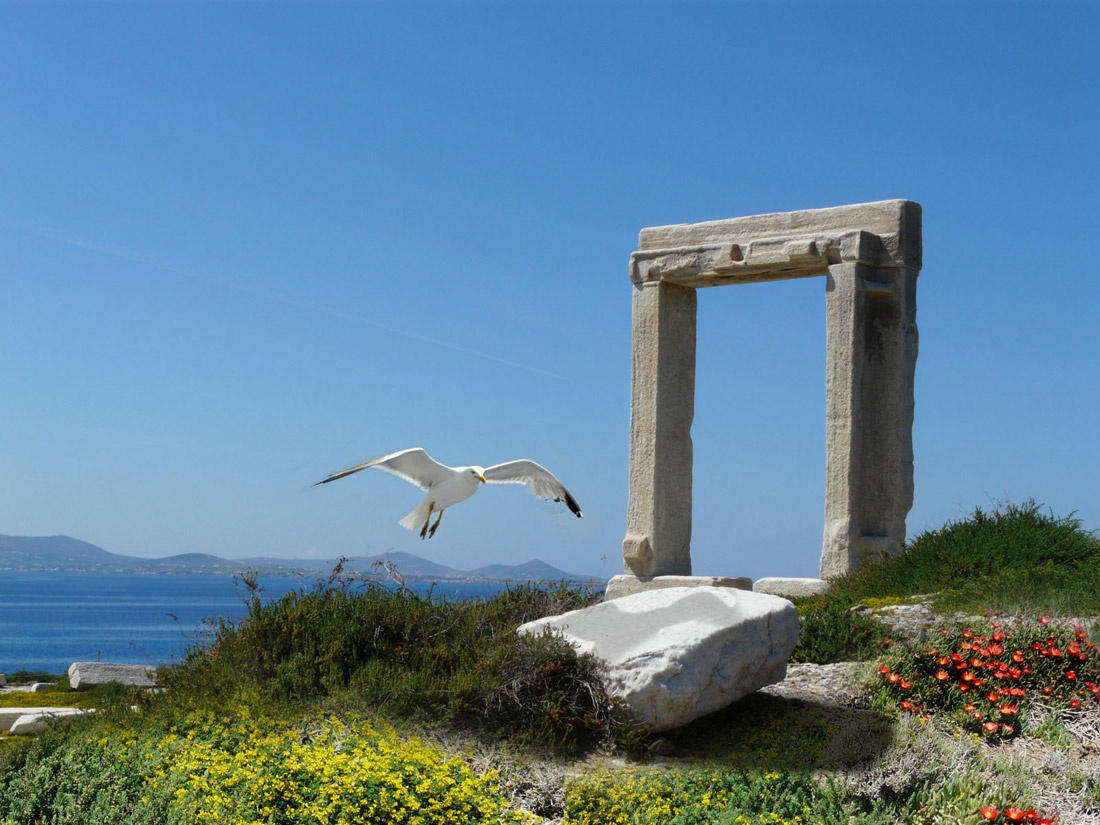 Today, the Portara of Naxos is the most imposing “door” of Cyclades. It picturesquely overlooks the ocean, so that with a bit of imagination it might be a portal to another world. The experience of viewing the sunset through the hill of Portara is completely worth it; offers panoramic views. Whenever you are in Naxos, your eyes cannot possible miss the Portara. It is popular amongst visitors. Even the NASA posted a photo on the website, reflecting the sunset from the Portara and characterized it as one of the finest in the world.

All of these attractions are revealing the majesty of Naxos, and many more are awaiting for you to explore….

Travel with Passion and Purpose…..

This website uses cookies to improve your experience while you navigate through the website. Out of these, the cookies that are categorized as necessary are stored on your browser as they are essential for the working of basic functionalities of the website. We also use third-party cookies that help us analyze and understand how you use this website. These cookies will be stored in your browser only with your consent. You also have the option to opt-out of these cookies. But opting out of some of these cookies may affect your browsing experience.
Necessary Always Enabled

Any cookies that may not be particularly necessary for the website to function and is used specifically to collect user personal data via analytics, ads, other embedded contents are termed as non-necessary cookies. It is mandatory to procure user consent prior to running these cookies on your website.