Marble is known since the Neolithic Ages, the first reference for marble extraction is dated back to 3rd century BC in the island of Naxos in the Aegean Sea. Its unique texture, made it preferable over the ages, and has been attracting fans, sculptors and builders for millennia. This beautiiful natural stone has been used to make artifacts in some very famous places, such as the marble floor of Parthenon, the Sphinx in Delphi, and the lions of Delos were sculpted with Naxian marble. Many statues and monuments are also found in Naxos, and other Cycladic islands.  This Naxos’ natural resource found in excess here, is been an inspiration to architects and artists with its uncommon and fascinating beauty to these days.

Naxos mountains, in the area of Kinidharos, are blessed with an abundance in marble. 5 mountains in this vicinity are active to nowdays. Prepare to swoon when you see these magnificent Naxos’ sightseeing, especially the Bolimbas, this one is the largest marble quarry, and it’s very closed to the road. A marble cutting factory exists also on the road between Kinidharos and Moni, and you can make a stop here, take a look, maybe you might want to grab from the left overs a small piece as a souvenir.

Naxian’s marble mineralogy of 99% calcite crystals, and 1% quartz adds an amazing sparkling effect and light transparency that gleams in the light. Naxos marble is also less porous and very durable.  Its rare qualities makes it superior and more pricy compared to other marbles in Greece. Today there’re quite a few sculptors in the island that create magnificent decorative objects. The marble quarries support the local economy by occupying quite a few locals, especially men from the village of Kinidaros. The marble quarries are within 2.5 Km from ELaiolithos.  From Naxos town heading towards Kinidaros village, they can be seen at about after 15 Km, at the altitude of 400. There is no way you can miss them – they’re on your way. 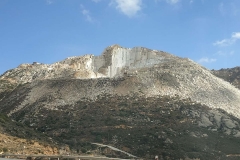 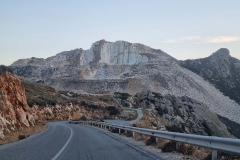 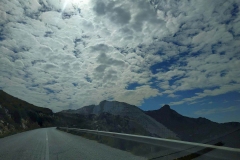 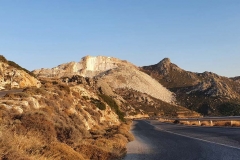 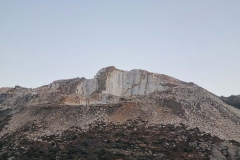 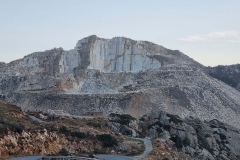