Tsikalario village and Chimaros village are 2 quaint hamlets that form the settlement of  Zoodohos Pigi in the valley of Tragaia. History and nature blend together in these 2 villages here. Worth visiting for their unique history, culture, and amazing landscape! See here the only Geometric cemetery with tumulus graves in Greece, and the menhir that marks its entrance which is the only one of its kind in the whole of the Balkans.

Do you dream of visiting the Mexico or the Grand Canyon? Then come to Naxos to these 2 villages here. The lunar landscape will make you feel like you are in Mexico or in the Grand Canyon. Huge granite rocks and stones in countless shapes create a unique scenery similar to the surface of the moon.   The overall scenic landscape gives you vibrations rather than a thrill.

Both villages are closely linked to the impressive Upper Castle (Apano Kastro) that is approximately 1 Km distance to their west side. This imposing Castle was the residence of the Duke of Naxos in the Medieval Times. It was originally constructed by the Venetian Marco Sanudo, who eventually chose the Castle in Naxos Town as his residence. Today, the Upper Castle continues to be impressive just like its prosperous days and during your visit you will also have the chance to feel the power of its past.

In the Middle Ages, Apano Kastro or Upper Castle was the strongest castle of Naxos. It was fortified since antiquity, but the ruins we see today are mostly from the 13th-14th century, when it was reconstructed by Marco Sanudo. And then this imposing Upper Castle became the residence of the Duke of Naxos in Medieval Times.

The area under the Upper Castle is also known as “Koutsocherado” and its name derived from the massacre of its residents by the pirates.  The castle was an ideal refuge when the pirates attacked, but never became a settlement for the inhabitants of the island. The castle had two fortification zones. The first zone was for the people while the upper zone was for the Venetians lords. That’s how the name Apano Kastro or Upper Castle derived. 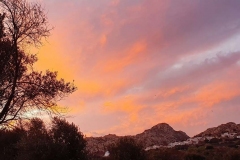 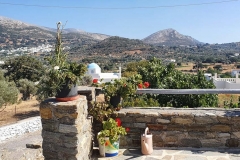 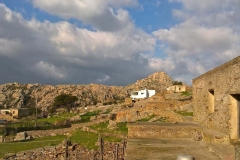 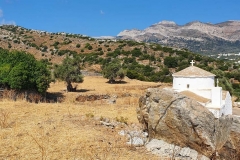 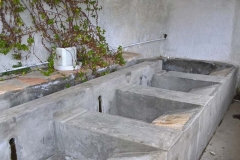 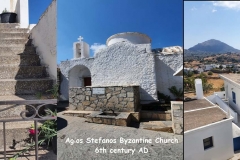 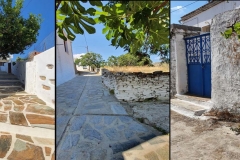 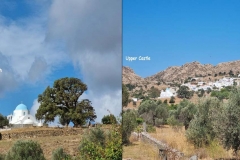 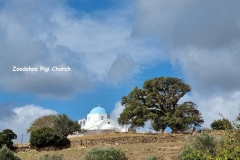 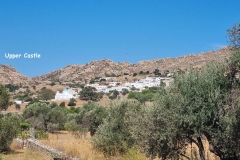 Both villages used to be the workshops of the castle’s residents.

Tsikalario village took its name from the word “tsikali” meaning ceramic cooking pot, the earthen kitchen utensil’ name in ancient Greek. The village used to be a pottery hub, making kitchen utensils for the inhabitants of the Upepr Castle.

Chimaros village took its name from the torrent that flows just below the village. Chimaros means torrent in Greek. Local legend though says that after the masacre of the residents by the pirates, Chimaros village was also named Koutsoherado, and the name stays with the locals up to nowdays.

The Upper Castle’s location proves that it was a benchmark for Central Naxos and especially for the municipality of Drymalia. Close to castle walls are the ruins of two Byzantine chapels of Virgin Mary Kastriani and Saint George that once used to play a determinant role in Naxos’s life. At the bottom of the hill, it’s the Necropolis, there are two ancient cemeteries from the Geometric period (9th – 8th century BC) and an ancient 3 meter upright stone monument which is considered unique in SE Europe. Findings from these cemeteries are today hosted at the Archaeological Museum of Naxos.

The area is amazing for hiking! It’s one of the must if you find yourself in Naxos. The Cyclopean walls and the loopholes of the Upper Castle, and the stunning views of the island all around, will wow you!

As you enter the Tsikalario that is the upper village, there is a famous old water spring at the entrance, next to the beautiful Agios Stefanos Byzantine church, 6th century AD, that is adorned with unique frescoes.

A little bit further up towards north, there is the Agios Pahomios Byzantine chapel.

In the center between the 2 villages there is their parish church Zoodohos Pigi.

The inhabitants of both villages are engaged in agriculture and livestock farming. Nowdays, the villages have about 200 permanent residents, and they’re connected to Naxos town with public bus KTEL routes.

Tsikalario and Chimaros Villages are 12 Km distance from Naxos town Chora, on the road between Potamia and Halki, 1 Km from Halki village, and 5 Km from ELaiolithos. There are 2 interesting hiking paths to Upper Castle and these 2 villages from ELaiolithos.  If you’re further interested in more information, you can read here