Feast your eyes in  Rena Cave! Get one with the Earth! Rina Cave, Rhina Cave or Rena Cave is one of the best sea landmarks of Naxos island! It’s a secret cave that can only be visited by boat.Rina Cave is located by an unspoiled beach with exotic crystalline turquoise green waters, in the Kalandos beach area, on the island’s southern coast. The cave, which lies to the right side of the beach, features some bird nests while a spring offering fresh water lies to the left-hand side of the cave.The sandy beach nearby is also lovely for relaxing upon.

Inside Rena Cave, you can clearly see Palaeolithic cave rock sculpting art on the back wall of the cave. A large reddish-brown-black depiction of an animal’s face emerges from the wall. One can tell it’s either a bull or a wolf’s face. “When I saw this for the first time I was blown away,” Helen of ELaiolithos, said. Is it a figurative artwork, a clear depiction of an animal from the real world? That was created by humans or it’s a rock formation created with the passage of time? No one knows. One thing is though true: this face will really impress you!

“We were swimming inside the cave 8 people, and only 2 of us were able to distinguish the animal’s face there” ~ Helen says. Rina Cave is as heavenly as it sounds! But it’s up to the one seeing the interior of the cave and this rock formation on how they’ll interpret it…Huh!

Even if you’re not able to distinguish that on the cave’s wall, you can enjoy the crystal clear turquoise waters here. They’re just spectacular!!!!

Rina Cave is frequently visited by yacht, and inflatable boats, as the beach is well sheltered from winds and waves. The Rina Cave spot makes up a part of many one-day boat excursion itineraries organized during the summer months. We highly recommend the Boat trip by Yannis through Panormos beach because of its traditional character and the value for money.

The chapel of Agios Sozon is a Naxos sightseeing, is another stunning spot on the island. Located in the southwest part of Naxos, between Agiassos and Kalandos beaches, the chapel has been built upon a steep rock by the water. It stands out with its white color and attracts many visitors.

The chapel can be reached from Agiassos and arrival here will reimburse you! Enjoy nature and the environment. There is so much out here that stands out as amazing, astounding, and downright breathtaking…along with its beach for swimming.

Many people hike from Agiassos to Agios Sozon. 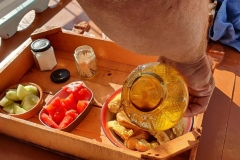 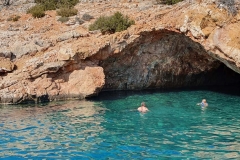 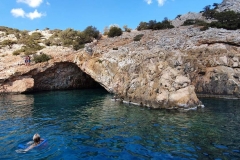 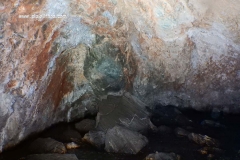 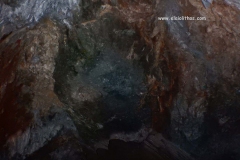 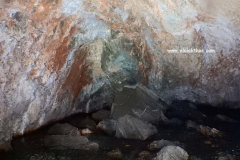 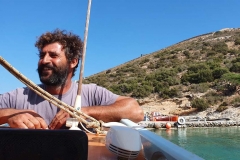 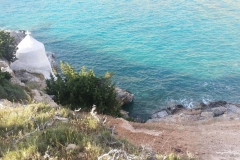 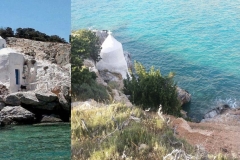